The world’s most famous varieties of dried pork

Like any product that has not undergone heat treatment, dried pork is one of the favorite dishes of all the people of the world. 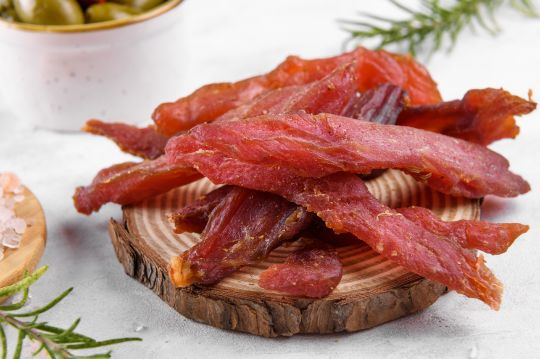 Drying is one of the oldest ways to prepare meat. It doesn't matter what kind: beef, venison, pork, horse meat, poultry ... What became the prerequisites for its appearance? Most likely, the need to preserve the remnants of fresh carcasses that have not been eaten right away. It's a shame to throw it away!
There are several legends about the origin of the desiccation method. Each of them has the right to exist, for the nomads of Asia, and the reindeer herders of the Far North, and the shepherds of the highlands, and inveterate hunters could be the inventors of the recipe.
However, today the dish is a delicacy. Served with fruit, wine, beer. For athletes and people engaged in hard physical work, it is a source of protein. For nomads, it is still a necessary food product, which is perfectly preserved outside special conditions. There are hundreds of methods: some are known all over the world, others are used only in certain areas.

The benefits of a jerky delicacy:

Therefore, it is recommended for people suffering from anemia, chronic fatigue, as well as athletes.
However, due to the high concentration of salt, pork in any form can not be consumed by those with high blood pressure, obesity, kidney and gastrointestinal tract disease. Nobody will benefit from the raw-cured meat product if consumed in large quantities. 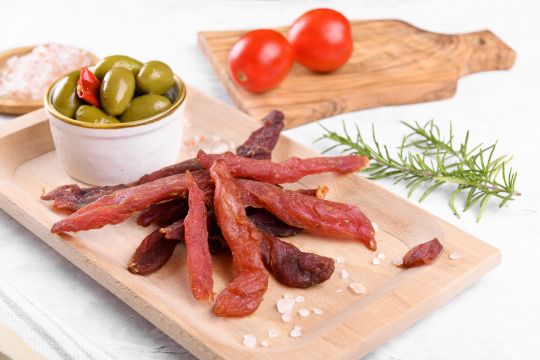 The cuisine of every nation proudly keeps the traditional recipes for the preparation and storage of dry-cured meat products from pork belly, ham, beef, etc. They are called differently everywhere.
Basturma is a nomad dish. Originally made from horse meat.
Prosciutto - pork (cooked for almost a year).
Shpek - tenderloin, aged in the fresh air for about six months, and then lightly smoked.
Jamon is a Spanish dish. Prepares for up to 3 years.
Chorizo ​​are jerky sausages popular in Latin American countries. Their homeland is Spain, Portugal.
Lap Chun - Chinese raw-cured sausages.
Sudjuk is prepared in Central Asia, the Caucasus, the Balkans, Turkey from lamb, beef, horse meat, pork tenderloin.
Jambon, or Bayonne ham, is a dried ham, the recipe of which is strictly kept by the French.
Borts (Mongolia) - dried long strips, crushed for home storage.
Bacon made from pork belly is very popular all over the world. It is another matter that everyone, before use, subjects it to a special culinary treatment: desiccation, smoking, cooking. It makes the brisket even tastier.
To prepare a delicacy, any meat product must first be disinfected but not exposed to high temperatures. How can this be achieved at home? The answer is Salt. Salt draws out water and "weakens" the pathogenic bacteria, leaving no chance for further life.
Here's just 1 of the classic recipes.
Dry the washed product with a cloth, rub heavily with coarse salt, sprinkle with a thick layer on all sides and leave in the refrigerator for a day.
After such canning, wash the meat under running water and desiccate it. Grate with a pre-prepared seasoning mixture (usually a mixture of peppers without salt).
Wrap a piece in several layers of gauze, put in a container and keep for 1-3 weeks in a cold place. Turn the package over daily. This is necessary for uniformity of raw-cured products.
The dish can be considered ready in a week. But if you prefer a dried delicacy, keep it for another 7-14 days.
Meat products prepared in this way are stored for about a month or even longer.